The statistic highlights Aurora Cannabis Patients Count, on a quarterly basis, from Q3 2016 onwards. Aurora had over 90,300 patients at the end of Q2 2020.
Subscribe to Pro or Enterprise plans to unlock this feature.

The interactive statistic highlights Aurora Cannabis Patients Count, on a quarterly basis, from Q3 2016 onwards. Founded in 2006, Aurora Cannabis touted the title of the second-largest cannabis producer in 2020.

Medical cannabis patients are patients with certain symptoms of such diseases, which physicians believe has a cure using cannabis and cannabinoids. For instance, vomiting and nausea during chemotherapy can be reduced by medicinal cannabis.

After the commencement of its product sales and launch of a comprehensive website in January 2016, Aurora Cannabis has registered more than 1,000 patients by the end of Q3. The patients can now access the products online. With the acquisition of CanvasRx, Canada’s largest medical cannabis counseling network, the company got a base of 10,000 registered patients. The company saw a 350% growth in Q4 FY 2016 from Q3 of the same year. After such growth, the company earns a base of 9,000 active patients since its inception.

This year the company has crossed a milestone of 20,000 active and pending patients in less than 21 months since the start in January 2016, becoming the fastest rate of patient registration after the start of commercial operations. Company’s last year’s acquisition, CanvasRx, adds up with 13,000 patients in Q1 FY 2017, in which 2,500 patients are registered with Aurora. Q4 saw an immense growth by 100% and tolled the patient count to 29,000 within nine months and has been referred by 8,400 doctors making it a leading cannabis counselor. This increased the active registered patients by 100% in Q4 FY 2017 to 16,400 from 8,200 in Q1 of the same year.

The company made a new acquisition of CanniMed, which soared the active patients by 21,300 to 45,780 in Q3.  Though the company saw a 223% increase in the total revenue in Q4 FY 2018, but the average selling price of dried cannabis and cannabis oil increased from Q3, make the patient count, down to 43,308. CanvasRx, a 2016 acquisition, now operates in more than 25 centers across Canada. The company also reduced the promotional discounts to new patients, which increased the margins up to some extent.

Internationally, the company scaled up to 10 countries across the globe. With an effect by the Canadian act, as of October 2018, the company started the shipment to Canadian wholesalers of adult-use cannabis in Q1 FY 2019, which generated a revenue of $5,53,000. Medicinal cannabis also increased its revenue by 62% from Q4 2018, and the acquisition of Anandia also generated a revenue of $4,47,000. This many development leads the Q1 active patients to soar up by 55.8% to 67,480. The whole year then witnessed a steady growth until Q4 to 84,729 active patients.

The three main markets of Aurora showed up compensatory results, where the adult-use cannabis market is down by 33%, and CanvasRx is stable, and internationally the company is soaring by 11%. Cumulation of all this revenue leads to a subtle increase the active patients by 8% to 91,116 in Q1. But, the situation got worsen this year as the adult-use cannabis market by 24% to $22.9 million, and the international market substantially decreased by 64% because of suspended operations in Germany, leading to a downfall of active patients to 90,307. 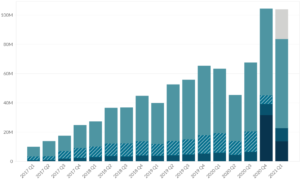