The Walt Disney Company reported its earnings for second quarter ending 28 March 2020 on 05 May 2020. Its revenues stood at $18.01 billion (an increase by nearly 21%) but its diluted Earnings per share (EPS) fell by 93% from $3.53 in the prior quarter to $0.26. The results of the quarter and the six months that ended 28 March 2020 were seen to be greatly impacted by the breakthrough of the Corona Virus pandemic.

The company was able to generate expected amounts of revenue for the quarter as the effects of the pandemic were largely seen at the end of the quarter. Further, the CEO of the company stated that, “While the COVID-19 pandemic has had an appreciable financial impact on a number of our businesses, we are confident in our ability to withstand this disruption and emerge from it in a strong position”.

The brand believes that it has a strong affiliation with its consumers which was evident from the response that was received by Disney+ since its launch in November 2019.

The segments that the revenues are divided into are-

The revenue for each of the segments has seen a positive change in the recent quarter. Except for Parks, experiences and product segment that recorded a decrease of 10% in the revenues falling to $5543 million and the segment’s operating income decreased 58% to $639 million.

100% of Hulu’s expenses and revenues are now included in the Direct-to-consumer & International segment as a result of the acquisition of a controlling interest in Hulu (March 20 2019).

Impact of Covid-19 on the quarterly results

The impact of the pandemic was most significantly felt in the Parks, experiences and product segment as the theme parks, retail stores had to be shut down immediately, cruise ship sailings and guided tours had been suspended. Theatrical releases and stage play performances at Studio entertainment had to be delayed, shortened or cancelled. The impact of the pandemic on the operating incomes was estimated to be close to $1.4 B.

The profits have fallen 91% (approximately) from $5.4 billion last year to $460 Million over the period of the crisis. It was observed that the closure of the various business segments indicated the segments to become financial liabilities for the company in the pandemic times and company’s revenue generated was largely a result of the acquisition of parts of 21st Century Fox last year.

The Chairman of The Walt Disney Company stated, “That the firm was facing unprecedented challenges due to the global pandemic but he mentioned that he is confident about the recovery once the trying times pass.”

As a recent development by the company, it plans to reopen its Shanghai Park on May 11 2020 with proper social distancing norms and health measures such as masks and temperature checks. Although, the timing of the re-opening remains unclear.

Cash flow for the quarter

The cash flow has seen a decrease of $1.2 billion from $6 billion in the last six month to the recent $4.8 B. The decrease in cash flow was a result of higher spending in the film and television production and lower operating incomes from the various segments. This increase in spending (film and television production) was incurred by the consolidation of Hulu’s and TFCF’s operations.

The cash flows though decreased are still positive and indicate sufficient cash balances and liquidity for the company to fulfil its short term requirements. 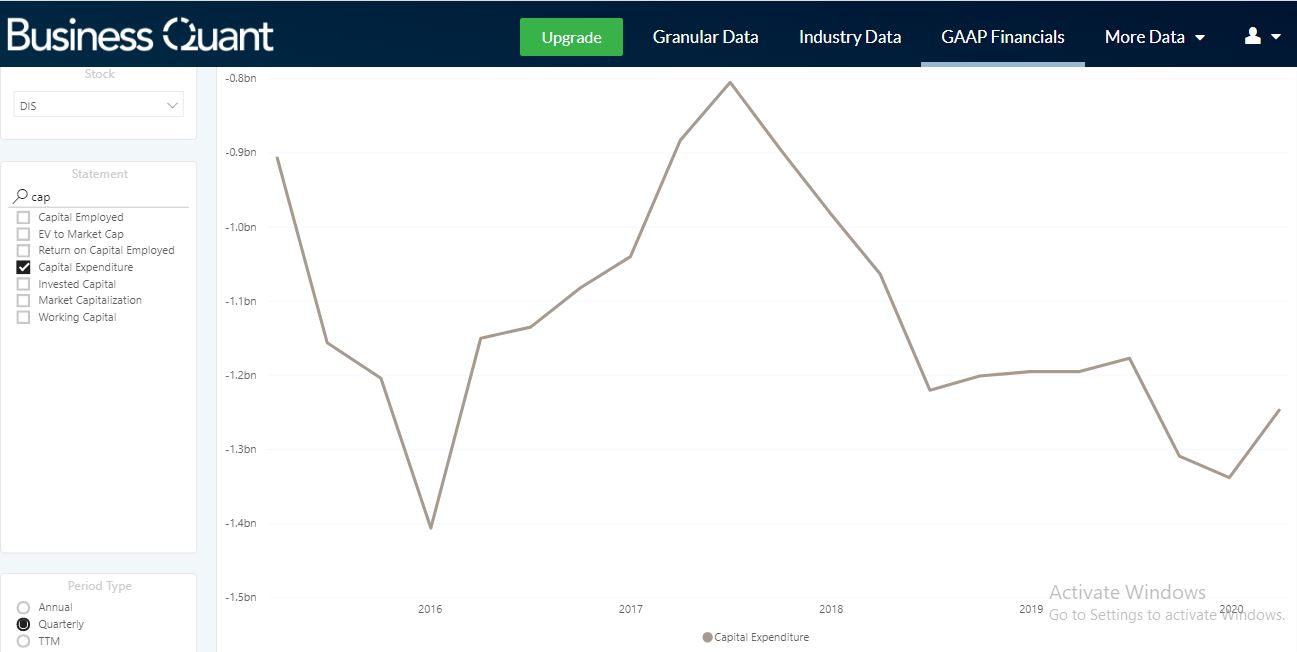 The capital expenditure for the sector increased to $2.6 billion from $2.4 billion as higher amounts were spent on technology to support the direct-to-consumer services and corporate equipment’s, facilities and technologies. These increase in expenditures were also diversified from the lower spending’s in other segments of the business such as domestic parks, resorts and also Star wars: Galaxy’s Edge.

The company was able to gain a gross profit of $3.4728 billion in the recent quarter. The company stands second in terms of its profitability among its competitors. A high gross profit for the company in the quarter would also help increase its credibility among its short term lenders. The short term liabilities would be efficiently looked after keeping aside sufficient amounts to cater for its long term liability requirements.

In my opinion, the company would regain its stability and higher revenues from all of its business segments once the situation of the pandemic is normalised. Investors should not focus on the short term financial condition of the company and keep their investments in the company for a long term to gain maximum returns from their investments. The company has sufficient cash balances and revenues from its operations to sustain itself in the market without the pandemic completely affecting its financial health.

It should focus on its direct-to-consumers segment to widen its presence on the virtual platform. Increase its investments to provide more variety of packages and deals for its viewers online. The company should take this as an opportunity to strengthen its base with online platforms.